By the end of last week, the District Council completed what might appear to some as fairly severe pruning of one of Wombourne Park’s most notable landmarks, namely the large oak tree close to the footbridge, located in the west of the Park. However, regular visitors to the park will recall the larger branches (some the size of small trees themselves) that have become detached from the oak as a result of high winds. The tree itself is used by local youngsters as a swing, and the author can only assume that this work was carried out as a safety measure, in order to reduce the potential risk to park users of injury as the result of falling branches. Looking westwards towards the foot bridge. 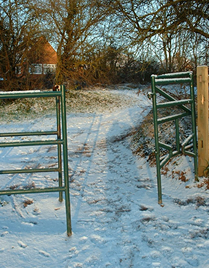 In the past, horse riders and motorcyclists have been known to use Wombourne Park, accessing the area via the Kingswinford Railway Walk. This understandably caused some alarm and raised concerns amongst the local inhabitants who regularly utilise the park for walking and recreational purposes. The horses’ hooves were cutting up the grass, thus far exceeding the normal wear and tear expected in a public park.

The motorbikes caused similar damage to areas of the park, and the speeds at which some motorbikes were being driven along footpaths caused understandable alarm and raised fears about the safety of walkers.

During the summer of 2003, a swing gate was established at the west end entrance of the park, which also accesses the Kingswinford Railway Walk. However, local youths have discovered a way to open the gate fully (please see the photo above), thus opening up the area again to motorcycles. The South Staffordshire District Council is in the process of rectifying the problem.